Divergent rate momentum by class of business (as shown by Figure 1) had been the recent norm as individual mini-cycles responded with varying levels of sensitivity to losses and broader macroeconomic factors. Pricing cycles in the commercial insurance and reinsurance sectors are now converging, marked by price increase moderation overall for the former, albeit with strengthening in challenged areas, and rapid acceleration (dislocation even) for the latter. 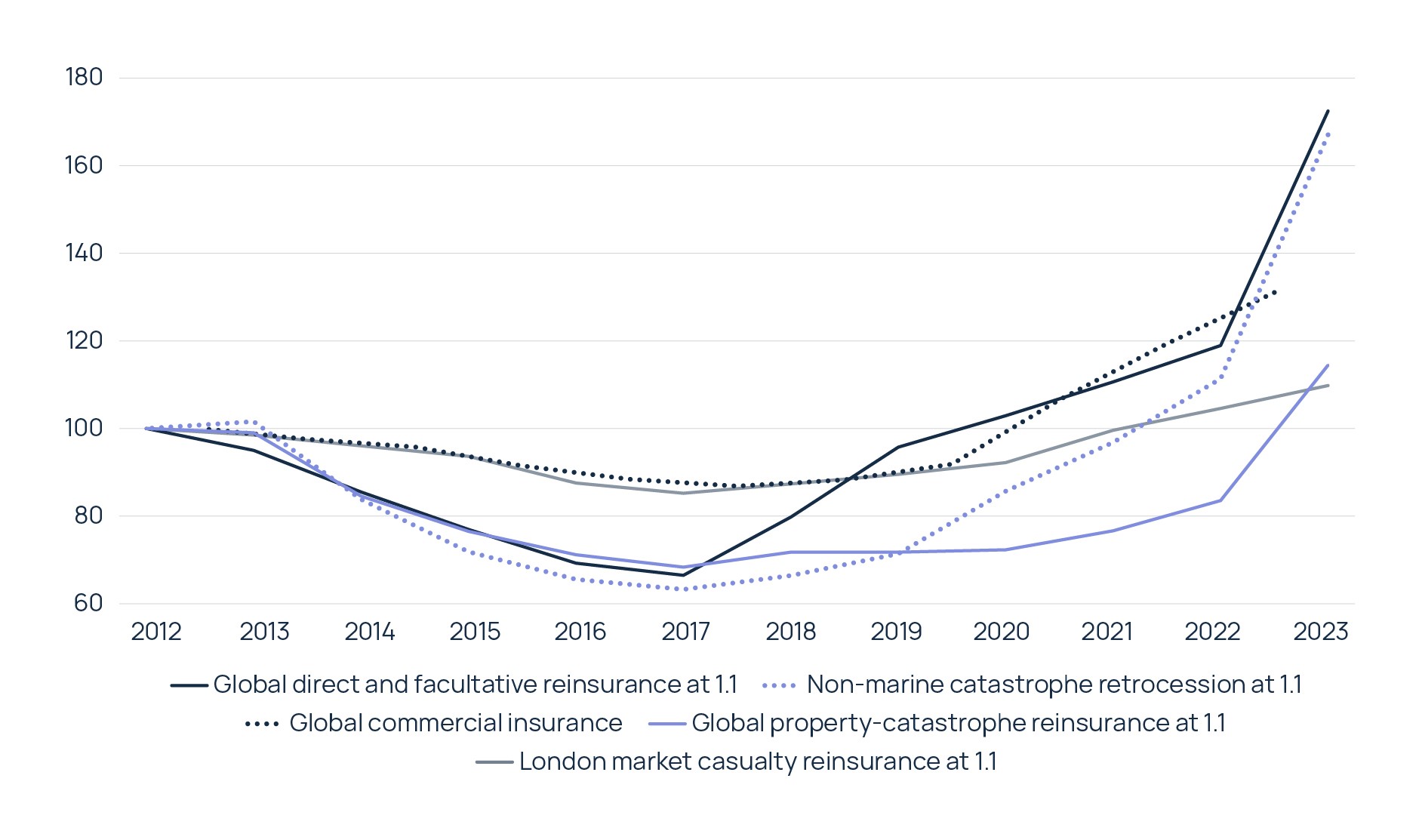 Mounting pressures in the reinsurance market, already evident during last year’s mid-year renewal cycle (as outlined in Howden’s recent report: A Tipping Point )1 were exacerbated significantly by Hurricane Ian after it made landfall in Florida as a category 4 storm, reinforcing one of the hardest reinsurance markets in living memory. Demand-side pressures coincided with a severe capacity crunch, as capital providers pulled back whilst others were only willing to maintain allocations.

This was, in turn, driven by a significant impairment of dedicated reinsurance capital, which fell sharply as investment grade securities experienced their worst performance in over 40 years. Historically, the sector’s gearing to high grade, short-to-medium duration securities has bolstered its capital position in an era of ultra-loose monetary policy. Reinsurers must now navigate an environment of rising inflation expectations and higher interest rates, which has driven assets lower on a mark-to-market basis.

Figure 2 shows how Howden’s estimate of total dedicated reinsurance capital has trended relative to gross reinsurance premiums written since the turn of the century. Capital erosion of 15.7% to USD 355  billion at YE22, the first full-year decline since 2008, together with significantly higher premiums, sent the sector’s solvency margin ratio (capital divided by premiums) to below 100, a level last recorded during the global financial crisis. It also left certain reinsurers more exposed to liquidity and credit risks at a time of heightened claims uncertainty.

“The last time we saw this level of capital dislocation was during the 2008-2009 global financial crisis. At the same time, the sector is experiencing its most acute, cyclical price increases since the 2001-2006 period if not before.” 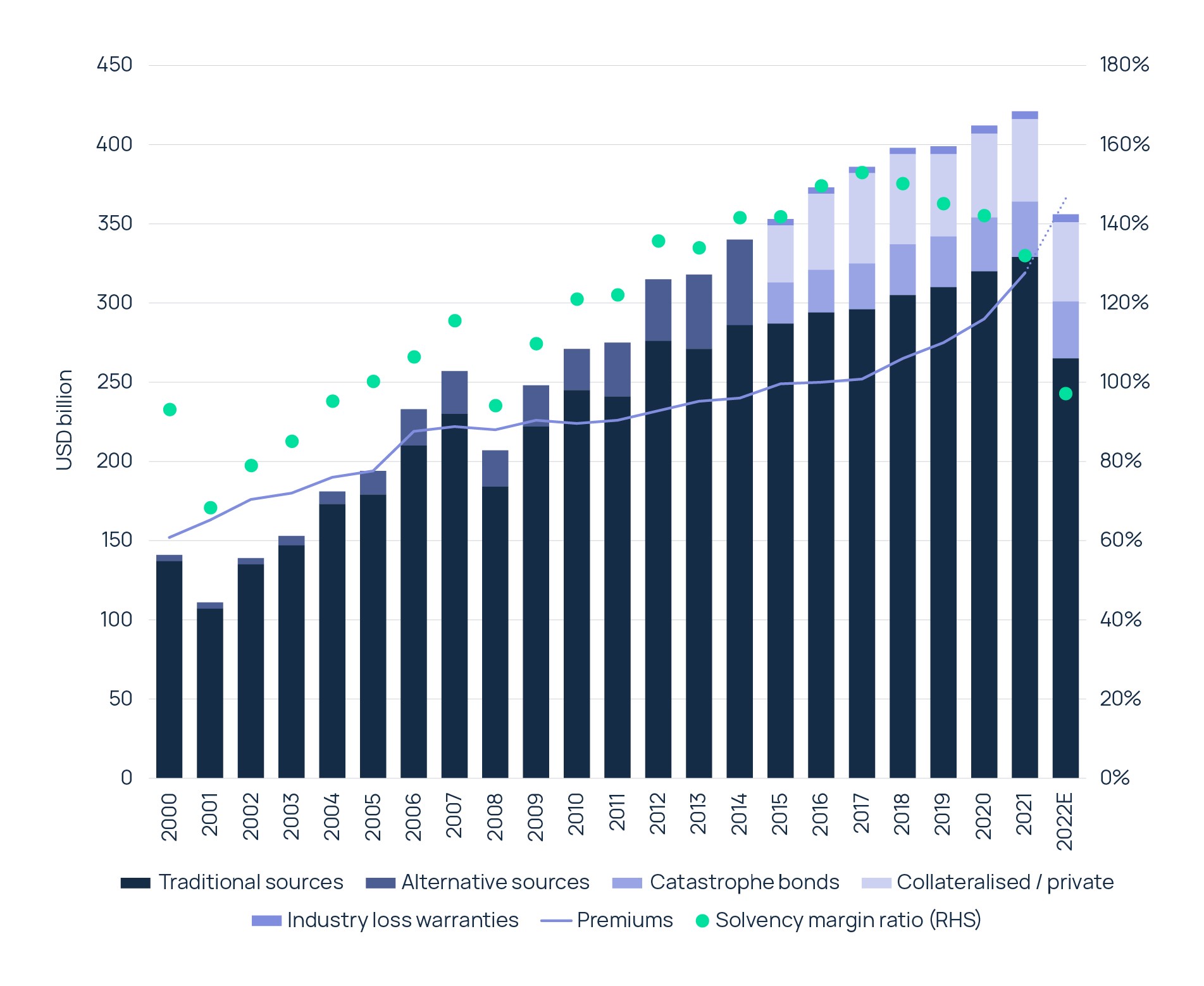 All of this has converged to create highly challenged and complex reinsurance renewals at 1 January 2023. Structures and coverage terms were at the forefront of property-catastrophe negotiations this year, amidst recognition from all parties that prices would rise significantly. Reissued firm order terms, non-concurrent terms and diversification plays leveraging demand for catastrophe capacity as a way to improve access and margins for non-property business reflected shifting market conditions.

Even in this highly challenged environment, the direct and facultative (D&F) market recorded strong growth in 2022 and continued to support clients renewing programmes at 1 January 2023. Increased demand for D&F catastrophe cover – driven by an inflation-induced rise in insured valuations on original business, attendant requirements for increased reinsurance limits and reduced retrocession capacity – added to pre-existing supply and pricing pressures.

Six successive years of significant D&F rate rises, with a marked acceleration of 45%2 in 2023, has yielded a cumulative increase of 160% plus since 2017 to take pricing levels above those recorded in the aftermath of Hurricane Katrina in 2006. The underlying market has benefitted from even more substantial pricing tailwinds during this time.

Bradley Maltese, CEO, Howden RE comments: “The D&F market at 1 January 2023 was resilient given the challenging backdrop to renewals. Capacity continued to be available at the right price and right level, which meant most placements were completed by year-end. This is testament to the D&F market once again differentiating itself by finding capacity for increased business flow whilst displaying underwriting skill and delivering strong results.”

“Investment in talent is essential to deliver the joined-up service clients expect in the current market cycle. Howden has made it a priority to ensure we have the best possible teams in place – teams that blend youth and innovation with seniority and experience – and with the imminent union between Howden RE and TigerRisk we look forward to raising the bar further in 2023.”

Property Cat: Late or incomplete retrocession placements meant that property-catastrophe reinsurers had less clarity than usual around their net positions when offering renewal lines at 1 January 2023. Howden’s Global Property-Catastrophe Risk-Adjusted Rate-on-Line Index rose by an average of 37% at 1 January 2023 (see Figure 3).2 This was considerably higher than the 9% recorded last year, and marks the biggest year-on-year increase since 1992.

Following on storm Bernd in 2021, the European market suffered further damaging catastrophe losses in 2022, including costly EU windstorms early in the year and historic hail events in France during the summer. Strong demand for additional limits to counter inflation, combined with some retrenchment from incumbent reinsurers, created a challenging environment for buyers that often resulted in higher attachment points, more stringent terms, paid reinstatements and substantial rate increases – up 30% on average, but significantly higher for loss-affected programmes. Capacity was nevertheless sufficient to see most deals over the line, particularly for cedents able to demonstrate strong performance and / or leverage long-standing relationships.

Renewals were more challenged in the United States, with an average rate-on-line increase of 50% reflecting a highly stressed marketplace that became even more so after Hurricane Ian’s historic loss. Increased demand coincided with supply constraints to create the most difficult U.S. renewal in decades. Some buyers failed to fill their programmes and named-peril coverage was more prevalent. Certain insurers resorted to shortfall covers as a result. The result was the biggest change in rates-on-line since 2006. The lack of capacity for lower layers meant cedents were forced to retain more.

Casualty: Casualty reinsurance supply dynamics, facilitated by reinsurers’ diversification strategies, remained stable throughout 2022 and into the 1 January 2023 renewal. Reinsurers in the casualty space have benefitted from a prolonged period of compounded price increases on original business, even if these moderated last year. Investment portfolios will also soon yield improved returns as interest rates rises.

Casualty renewals nevertheless tightened at 1 January 2023. London market casualty excess-of-loss reinsurance, including adjustments for exposure changes and the inflationary impact, rose by 5% on average at 1 January 2023. Reinsurers cited rising inflation and the prospect of higher claims severity for the increases. Outcomes were similar to those recorded last year (where the corresponding data point was + 5%), as strong demand and discerning supply told.

The world has become a riskier place. The effects of COVID – huge fiscal and monetary stimulus, supply constraints and high debt burdens – have collided with the devastating fallout from Russia’s invasion of Ukraine to bring about a great realignment, characterised by structurally higher inflation, rising interest rates, increased recessionary risk, heightened security threats and accelerated deglobalisation. 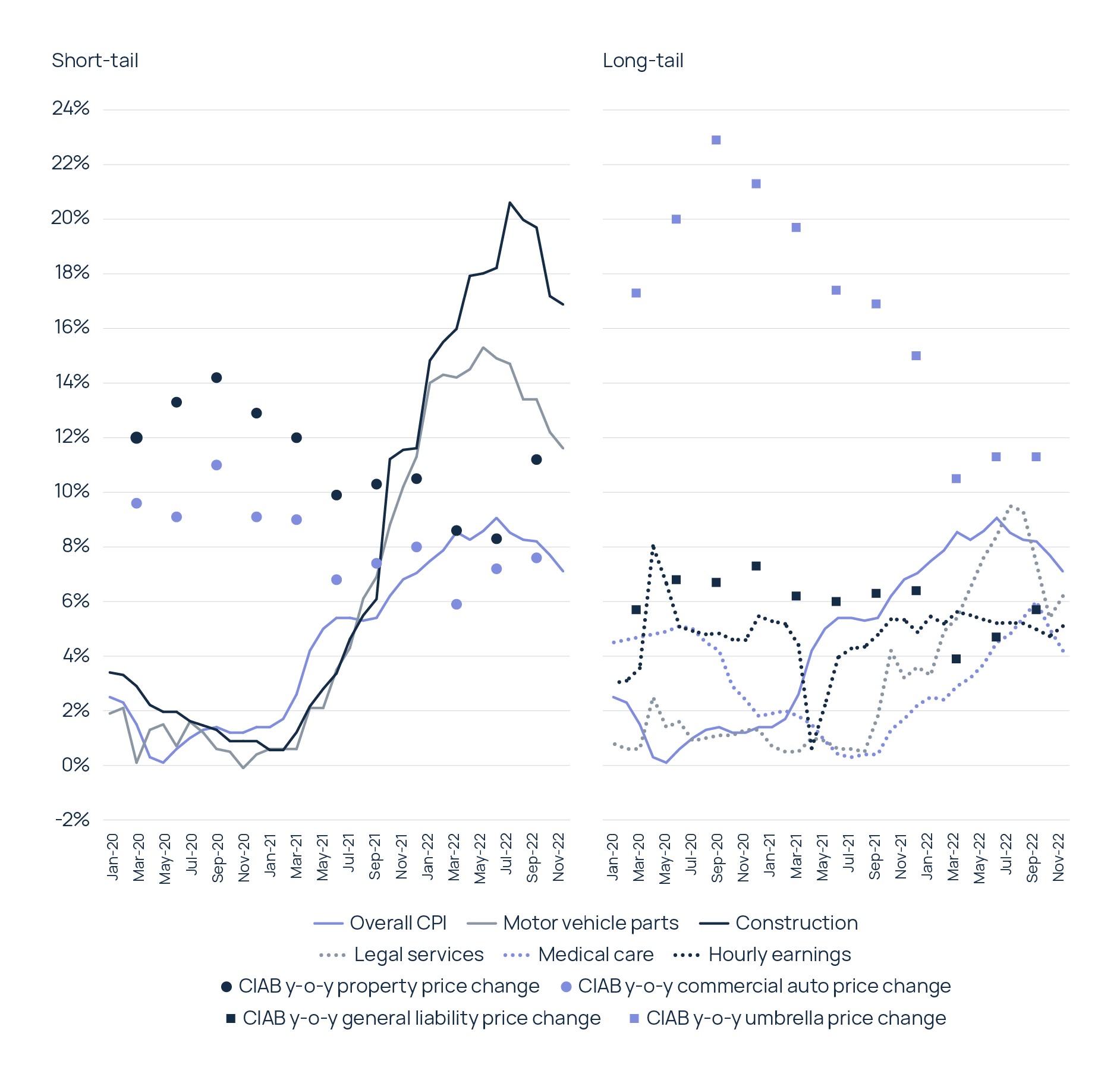 This backdrop has important implications for the (re)insurance market. How inflation develops over the next year or two will be a key input into demand and loss cost inflation. Figure 4 shows that short-tail lines such as property and motor have been most impacted by surging inflation in 2022. Long-tail lines have been less impacted so far, although reserving adequacy will come under close scrutiny in 2023 should inflation penetrate into sticker parts of economies and become entrenched. 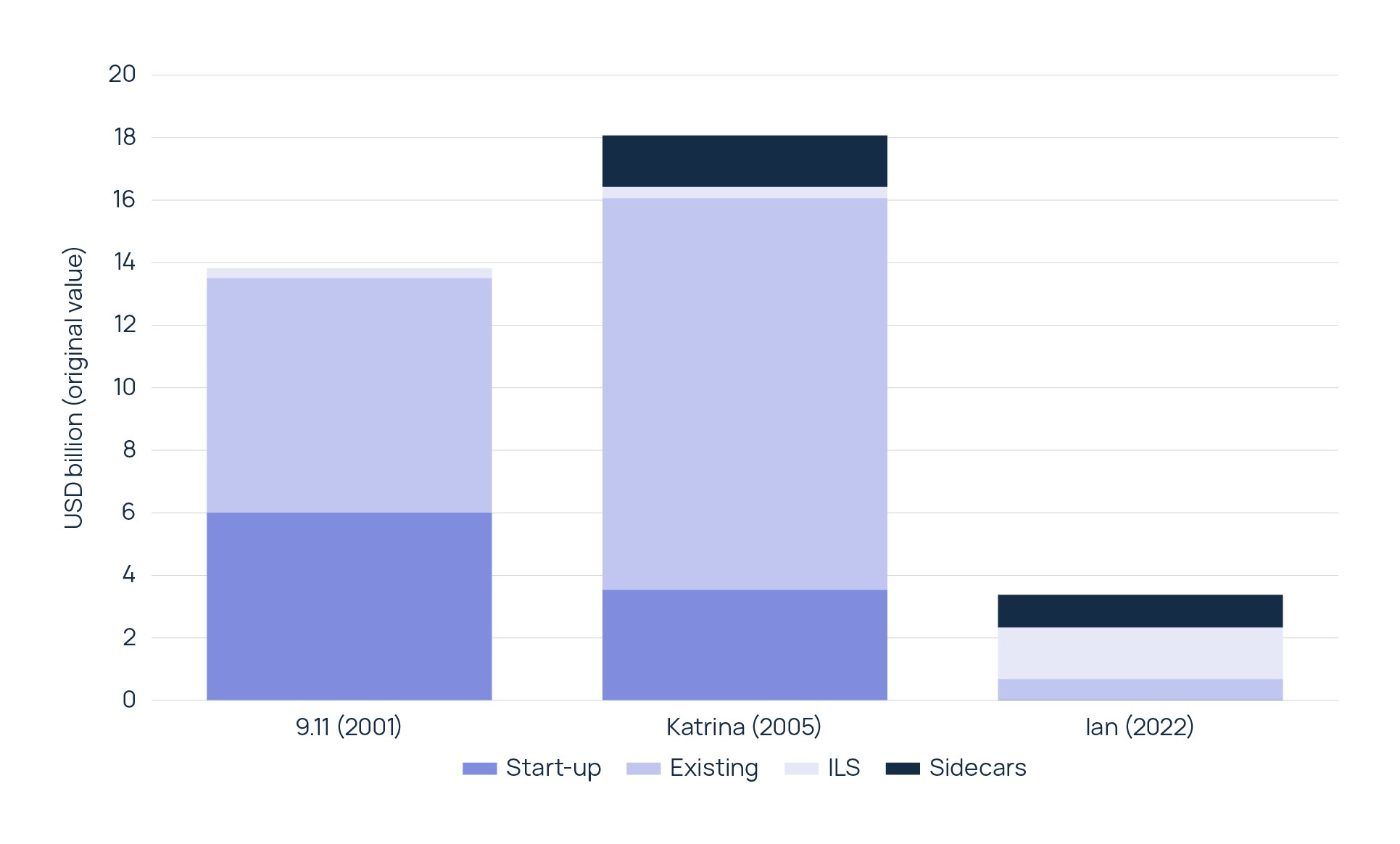 Macroeconomics are also crucial to capital inflows. The (re)insurance sector has previously attracted substantial amounts of capital post-shock events to compensate for the loss of capacity and leverage the attendant pricing opportunities. Although inflows slowed significantly last year, especially compared to previous large loss years (see Figure 5), strong potential returns on offer in 2023 could soon entice capital back into the market.

José Manuel González, CEO, Howden Broking added: “Unlocking capacity in order to find solutions for rapidly changing risks that may soon outgrow the sector’s capital base will be crucial to maintaining relevance and offering clients coverage that meets their needs. This is especially true for 2023, given the considerable macroeconomic and sector uncertainty, as well as the challenging start to the year for the reinsurance sector.”

“Capital will therefore be a key differentiator for insurers, reinsurers, MGAs and ILS funds, which plays to the strategic investments Howden has made in this area in order to facilitate inflows, create capacity and find solutions for clients across the insurance value chain. Current market conditions demand a new approach to broking that is cycle-savvy, innovative, aggressively entrepreneurial and home to the sector’s strongest talent. Come and talk to us.”

[2] This is a point estimate within ranges depending on loss experience, exposure, territory and other client-specific conditions, and masks pockets of significant challenge for certain risks. 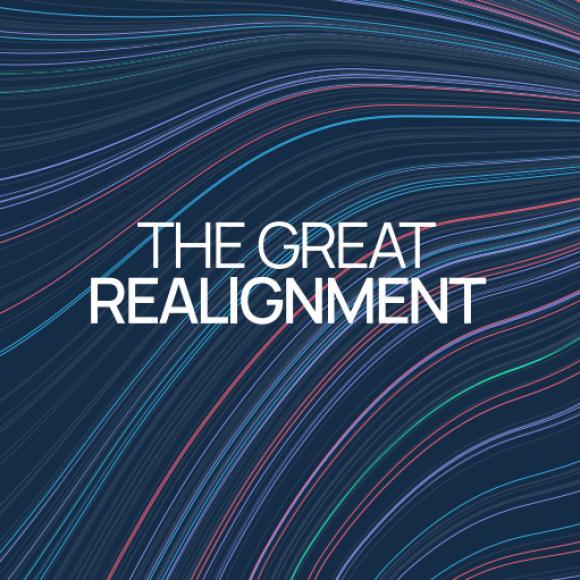