While it is now more than 20 years since the profession switched its PII arrangements for primary cover from the Solicitors’ Indemnity Fund (SIF) to the open market, SIF has continued to play an important role in the protection of both solicitors and their clients. Over this time SIF has provided the following:

The cover under (3) above is commonly referred to as “supplementary cover”. It has been free and provided valuable peace of mind for solicitors who have closed their firms since 1 September 2000. It was back in 2016 that the SRA originally decided that the cover would cease on 30 September 2020, but there was a last minute turnaround on the issue in June 2020 and the date was extended to 30 September 2021. This has recently been extended again to 30 September 2022. Time is now ticking towards that deadline.

To put this issue in context it is useful to look at the volume of claims that are generated following the closure of a firm – and following the 6-year run-off period in particular. Below is a graph based on information provided by the SRA[1] and sourced from SIF claims data over the period 1987-2016. It shows the number of years from the date of loss until the claim was made. While we do not have updated figures from the SRA, we do not expect the relative percentages to have changed significantly, if at all, over the last five years. 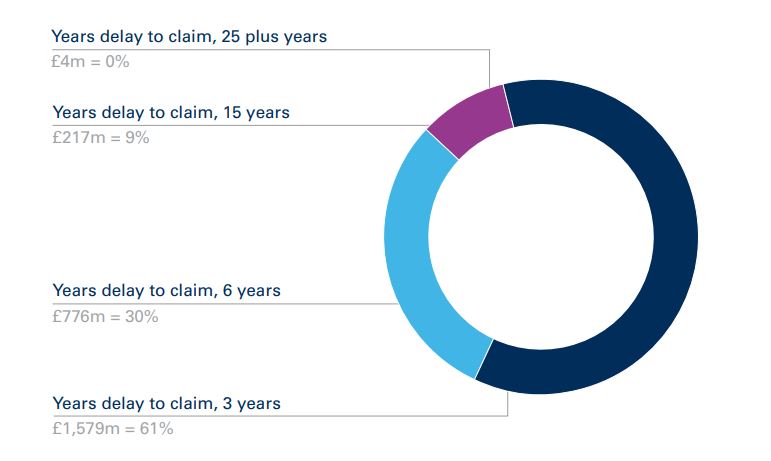 The analysis confirms that it is not at all uncommon for claims to be made beyond the standard 6-year limitation period. This can happen where it is possible to run a date of knowledge argument under section 14A of the Limitation Act 1980 which would extend the longstop date to 15 years, provided the proceedings are brought within 3 years of the date of knowledge. Another example is where the defendant law firm has deliberately concealed a fact relevant to a client’s right of action against it. In such a case section 32 of the Limitation Act 1980 says that limitation does not start to run at all until the claimant has discovered the concealment, or could have discovered it with reasonable diligence.

Who is at risk here?

We caution against dismissing this issue on the basis that your former practice was an LLP or limited company. While the entity has the benefit of limited liability, there remains the risk of a claim against an individual (principal or employee) based on negligence.

If your firm was succeeded upon closure and did not take elective run-off under the successor practice rules set out in the MTCs, then you are not affected. The successor practice will continue to be responsible for any new claims against your former practice. However, there is still potential for concern in this scenario if the successor practice closes and takes run-off (or has already done so), in which case you would be at risk at the end of their 6-year run-off period.

As outlined above, SIF has also provided cover to firms and sole practitioners that closed prior to 1 September 2000 when demutualisation occurred. Those practices were never required to purchase a run-off policy and they will continue to be covered by SIF. It will be more than 20 years since those practices closed and the prospect of a claim after 20 years is limited, but it can happen.

If you are a continuing practice then it might be tempting to think that you do not need to pay attention to this issue, on the basis that it does not affect you. Given the “claims made” nature of your current PII policy you are covered for all claims made – even if the work was done years ago. However, we urge all practitioners to think ahead. If you want to close your practice at some point in the future and cannot find a successor practice to assume responsibility for future claims, then at the end of your 6-year run-off cover, you too will be at risk.

What is the solution? Will cover be available in the open market?

At the present time, the Law Society has no solution for replacing the supplementary cover and a market solution has likewise yet to emerge. We consider that some insurers might be interested in providing additional cover to firms when their 6-year run-off policy ends, but if this does happen there are likely to be the following caveats:

Are you a successor practice? What is the position where elective run-off was taken prior to succession?

A common question we have been asked relates to the position where a practice took elective run-off cover prior to succession. This option has been available since 1 October 2013. It has often been adopted where the successor firm has been concerned about the impact of the claims history of the prior practice on their own PII and the potential for future claims. Some successor firms are concerned that responsibility for cover will revert to them once the supplementary cover ends. We are able to confirm that this is not the outcome under the MTCs. The definition of prior practice excludes any “practice which has elected to be insured under run-off cover in accordance with clause 5.5 of the MTC”. However, you still need to beware that you have not agreed a different position in negotiations or documentation regarding the acquisition.

Another concern from a commercial perspective could arise where a principal from a ceased practice is now a principal in your firm. There could be financial stress and reputation issues for the individual in the event that there is a significant claim for which they have no cover. That could in turn impact the reputation of your firm.

We recommend that firms consider the potential for such a scenario and engage in discussion with the individuals concerned regarding a solution. As explained above, it is hoped that there will be a solution by the time we reach 30 September 2022. However, if nothing does emerge from either the insurance market or the Law Society, then in this scenario a firm might consider whether it is possible to endorse its own policy to provide cover. Obviously this would come at additional cost and depend upon your insurer’s appetite to take on the additional risk. There is no compulsion for them to agree and if they did, the cover would not need to be (and is unlikely to be) MTC-compliant. There will generally be a reason why you insisted that the firm took elective run-off cover prior to succession, and for that reason we would urge caution with such an approach.

Anyone who currently has the benefit of the supplementary cover needs to consider whether they have any additional matters to be notified to SIF by 30 September 2022. Do not miss this deadline. You should also stay in close communication with your broker about what is happening and what the options are for future cover as we move closer to 30 September 2022.

While a market solution might be available when the closure of SIF proceeds, this is in no way guaranteed and it will be at a financial cost. Future planning will therefore be essential. Ensuring that you are on top of risk management right now is critical, both to reduce the potential for future claims and to ensure that you can present your closed firm as a good risk. It will also be important to ensure that information remains available, as any prospective insurers will want details of the former practice. Past insurance proposal forms should therefore be carefully stored for this purpose.